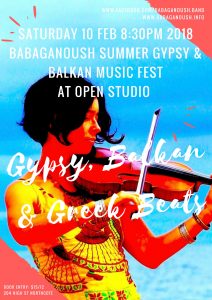 Babaganoush are back at Open Studio for their Summer Gypsy & Balkan Music Fest after a long summer surf break! With guest percussionist (darbuka player) Volga Tunca, they may create white-wash surf waves for those who want to dance (or should we say surf) to the music. A night of exquisite music not to be missed!
$15 adult, $12 (concession card holders only)
NB: PLEASE DON’T JUDGE US FOR OUR SURFING ABILITIES, WE ARE JUST FOLK MUSICIANS

Babaganoush are an energetic exuberant, rapturous five piece band for indulging in ancient folklorique sounds with an edge of unequivocal conviction. They play the best mix of Gypsy Music, Balkan Beats & Greek Folk with an organic beauty that is rare and unforgettable! From the Spiegeltent to Europe’s liveliest bars, and Australia’s greatest music festivals Babaganoush have ventured the world music circuit in full swing.